Shadow Merchant's second album, "Tomorrow", is out and is already receiving great reviews! The album has been reviewed in some of the leading music magazines such as Progression, Prog, Fireworks, and Power Play. Check them out!

Check out the recent review of our latest album in this month's issue of Power Play Magazine! 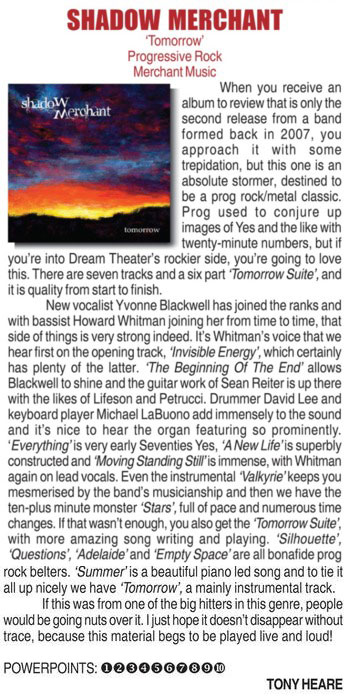 From the latest issue of Fireworks Magazine...

(Translated from the original Dutch)

Shadow Merchant arose when the radiologists Sean Reiter and Paul McGinnis, who worked in the same practice, discovered their mutual affinity with progressive rock. Both were, in addition to colleagues, experienced musicians (respectively guitarist and drummer) and began rehearsing together. Not long after that they composed some songs for the debut album The Tunnel from 2014. Then they named their project / band to 'merchant' an outdated jargon term for radiologists. On May 4, 2018, the second Tomorrow album was presented at RoSfest.

"We are extremely proud of what we have achieved with Tomorrow," says Sean Reiter. "Everyone performed at top level and the quality of the production is nothing short of amazing. We think that this album represents a huge step forward for the band. After the many changes in the line-up of the band, we regard Tomorrow as a renewed start. "

Invisible Energy opens the album equally tight and energetic. Pointed guitar-oriented rock with an authentic touch due to the authentic sound of Hammond organ. At The Beginning Of The End by packed in the same pattern. Singer Yvonne Blackwell has a powerful voice with a slightly hoarse sound which makes me feel good. The sound of the band reminds me regularly of that of District 97 and Saga . The variety of solid guitar parts and diverse keyboard work is easily audible on Everything . On this song there is also vocal alternation between the aforementioned Yvonne Blackwell and Howard Whitman, who besides bass guitar also takes vocals.

The resting point A New Life is sung solo by Blackwell. Here she sounds like a cross between Anneke van Giersbergen and Margriet Boomsma (Flamborough Head). Stars is the longest number by more than ten minutes by distance. The minute long heavy intro is well built up and after a piece with acoustic guitar it is transferred to a piece by Blackwell with cliché-like lyrics and row melting. However, it should not spoil the fun. Tempo and atmosphere change follow each other in rapid succession. Pieces with solid guitar work and whipping drums alternate with classical piano playing.

With the solid instrumental Valkyrie , a different, more progressive way is used because of the many changes in size. On the mainstream rocker Moving Standing Still the microphone is alternately in the hands of Blackwell and Howard. The countless repetitions make the song long-winded and unnecessarily too long with almost six minutes. On Silhouette , Michael LaBuono applies with swirling keyboards. Blackwell's vocals have been doubled here. And I do not think that is a success. The song flows seamlessly into the pomprock-like Questions where Whitman takes care of the vocals and Sean Reiter plays a biting guitar solo a Ian Crichton (Saga). Summer and Adelaideare two short and beautifully sung ballads that form a transition to the Saga-like Empty Space . Namur to the album Tomorrow closes the album. After an intro of just three minutes with guitar and keys, Blackwell puts her last vocal penny into the bag. Because of the irritation-inducing pitch and repetitions a redundant penny.

The colorful cover artwork is designed by Stefanie Silverman. She painted a suggestive piece based on the ideas of the band. In the CD booklet you will find more of her artistic expressions. Tomorrow is a nice album that can not be faulted. The enthusiast of uncomplicated progrock comes with this album for one hour more than his or her features.

Hot off the presses! Here's our review in the latest issue of Progression Magazine... 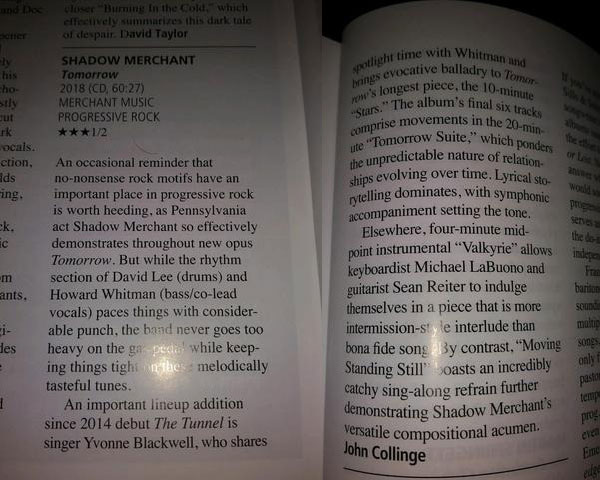 Shadow Merchant's debut album, "The Tunnel" is a concept album centered on one man's life, from birth to death, and what is learned along the way.

Check out some of our CD reviews...

Excerpts of reviews of The Tunnel...

"...The Tunnel is a terrific amalgam of [Rush and Kansas as influences], full of giant-sounding Lifeson-esque guitar, florid instrumental passages, and gloriously pompous keyboard interjections, notably on 11-minute epic The Kindness Of A Stranger..."

"...The Tunnel has a crisp and often Hard Rocking edge that, at times, generates genuine excitement and drives both the music and the listener on..."

..."The record contains all the essential ingredients for a proper classic prog rock album: extended songs, plenty of accomplished musicianship, solos galore, lashings of keys and lots of melodic intent..."

..."Strong, slick and slightly less on pretence than certain other household prog names, the solos and vocals both throw their weight at each other as well as just our ears..."

Shadow Merchant are based in Philadelphia, USA. The band started in 2007 when radiologists/colleagues Dr. Sean Reiter (guitars, lyrics and album concept) and Dr. Paul McGinnis (drums) discovered they both had an affinity for progressive rock. With Howard Whitman on lead vocals and bass and Donald A. Henney Jr. on keyboards the band made their debut album The Tunnel.

Their music reminds me of Spock's Beard, Rush and also somewhat of Saga. The album starts great with instrumental track Alpha, you immediately hear that this band knows how to grab the attention of the listener. The second track Noah really reminds me of early Spock's Beard (when Neal Morse was still in the group). The singing also reminds me of Neal Morse. The third track The Architect has a very Rush-like intro. It's very up tempo and has a very cool vibe. The bass intro in fourth track Selfless Devotion is fantastic. It's a real up tempo and powerful track, and I love the way how the keyboards and guitar cooperate during the solos. I think it's also my favourite track on the album. The fifth track Once is great. It's a very rocky track with a splendid guitar solo and powerful vocals. This would be great as a rock single. The sixth track Mid-Life Crisis is another instrumental track from the album. On this track the band really show's what they are capable of and it has a great guitar solo. The seventh track Judgment Day is my least favourite track from the album. It could have been more spicy in my opinion, despite the good intro. The eighth track Into The Tunnel has a lovely acoustic guitar intro and it's also the longest track on the album. The outro of the track is also very bombastic that ends with a lovely piano part. The ninth track The Kindness Of A Stranger actually starts with a beautiful piano piece and later turns into a great track. It has a very long instrumental intro with catchy riffs. The vocals are very powerful on this track as well and I really love the outro of the track. The tenth and last track Along The Way starts a bit country-like. A real feel good song.

This is an album you can listen to in the background and still draws your attention. It's a bit too long for me sadly, but that doesn't bring down the listening experience. If you're a fan of The Flower Kings, Spock's Beard and Rush, then this album should be in your collection! This band should make more albums for sure! I would also love to see this band perform live. 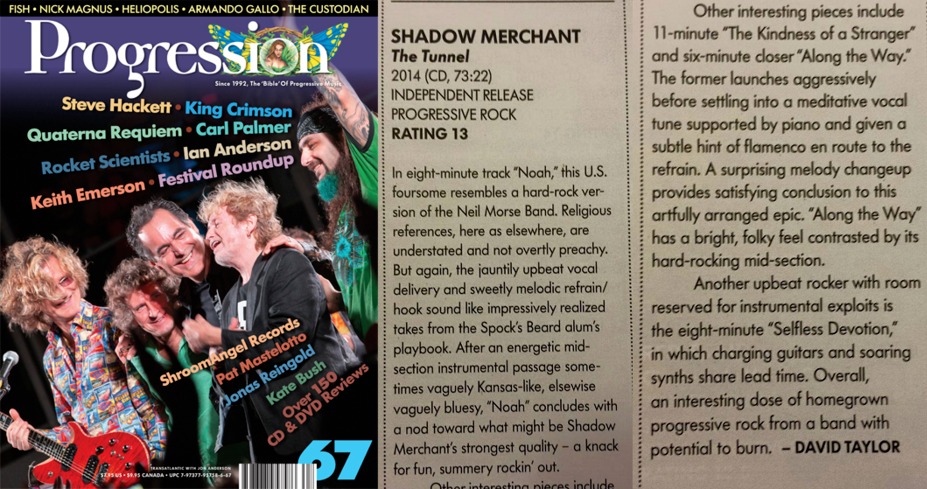 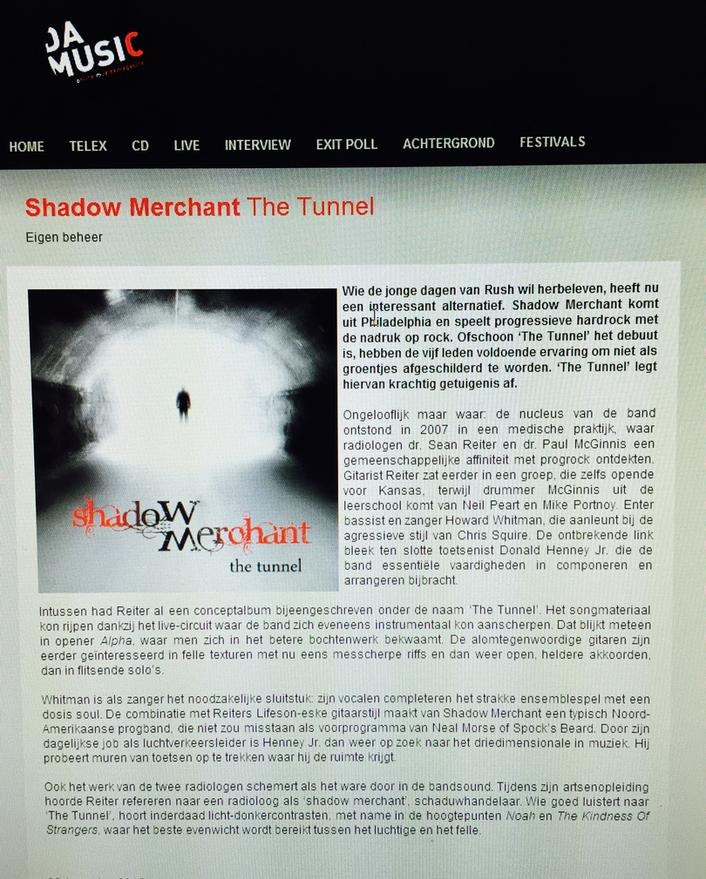 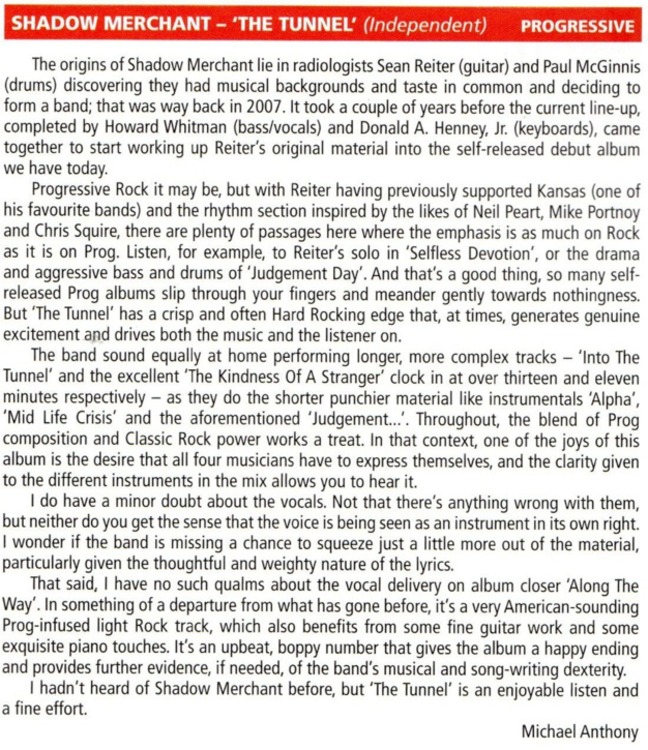 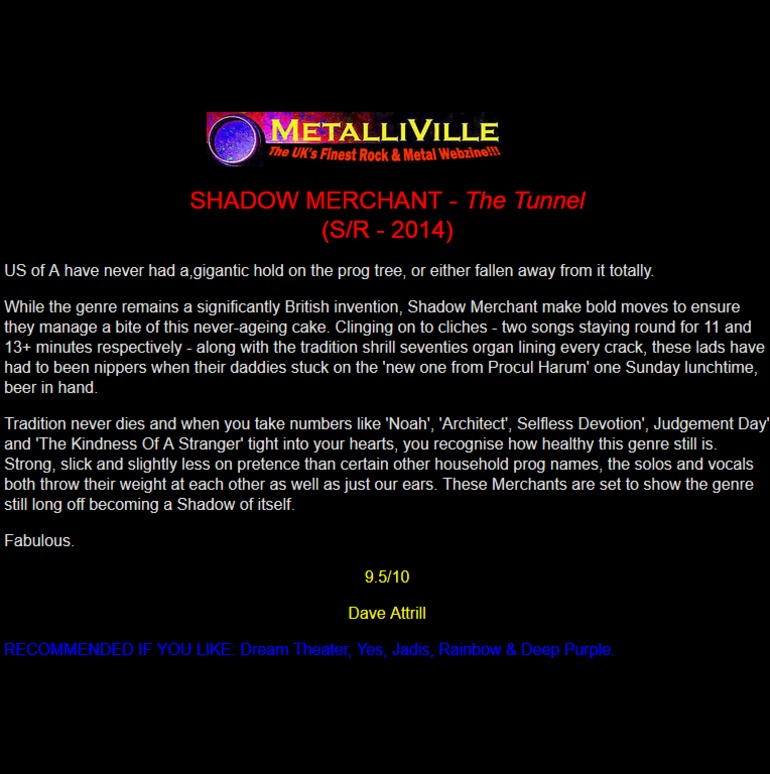 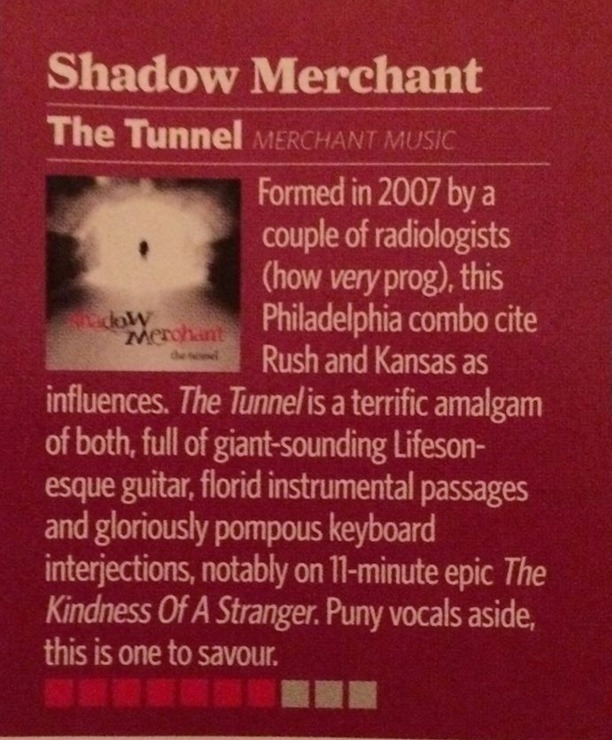 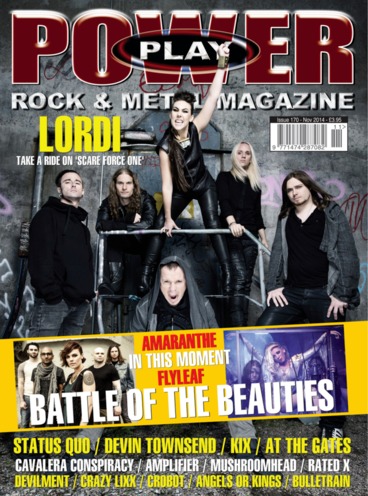